I learned to fly at the Airways Flying Club, Booker, Buckinghamshire, England where, in 1969/70, I earned my PPL, IMC rating and night rating.

At the time I was learning to fly I was working as cabin crew for British European Airways in Tridents and – occasionally – the Comet 4C (only used for charters by then). This gave me a taste for working with a crew.

Accepted into the RAF in 1970, I trained on Jet Provost Mk3 and Mk5 at RAF Linton on Ouse.

My student time at Linton. I’m in No 77 (outboard ship)

I did my multi-engine training in the Vickers Varsity (I loved the big Bristol Hercules radial piston engines – machines from another era) at RAF Oakington near Cambridge, then on to the Operational Conversion Unit  for the Lockheed C-130K Hercules at RAF Thorney Island, followed by my first operational post as a working copilot on LXX Sqn based at RAF Akrotiri, Cyprus. 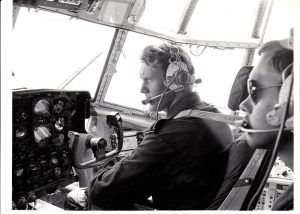 Copiloting the Herc on my first tour of duty

We flew all over the Middle East, Far East, and Europe, but our regular task was to resupply operations based in Oman (Masirah, Salalah, Seeb, Nizwa etc), and Iran (Teheran and Mashhad).

After the failed coup d’etat in Cyprus in 1974 followed by the Turkish invasion of the island, squadrons based at Akrotiri were gradually withdrawn to UK bases, and when flying units were required there they were sent on detachment. LXX withdrew to RAF Lyneham, and I completed my tour of duty there, operating all over the world. In 1976, with my then squadron commander as captain, I did a complete “westabout” via the USA, Honolulu, Wake, Guam, Hong Kong, Singapore, Gan, Masirah, Akrotiri and back to Lyneham.

In 1976 I was posted to the Central Flying School (RAF Cranwell at the time) to train as a Qualified Flying Instructor (QFI), and on graduation returned to RAF Linton on Ouse, but this time as an instructor.

I had always dallied with the idea of being a journalist, so I thought I’d try it, and applied to Flight International. In 1979, after 6 months’ probation, they took me on as Air Transport Reporter.

After two years I became the Air Transport Editor, and in the 1990s the new position of Operations and Safety Editor was created for me because it reflected the subject matter for which I was becoming well known in the industry, and to which readers, on the whole, reacted well.

This image, taken in 1985, records one of my favourite events since I began working as an aviation journalist. Airbus let me fly its A300B2 testbed which had been kitted out with a sidestick that was connected, through the FBW computers arrayed in the cabin, to the aircraft’s conventional control surfaces so it flew like the A320 series was going to fly in 1988 when it entered service. My copilot (captain in the right hand seat) was the remarkable Bernard Ziegler.

The rest is Flight International/FlightGlobal history, but in parallel I always worked freelance for international news broadcasting media and for documentary channels like Discovery and National Geographic. I still do.

And I still work with FlightGlobal as their Consulting Editor.

Just a bit of historic context. Aviation is clearly in the blood. My grandfather, Major LW Learmount DSO MC RFC, was a military pilot in the Great War.

He flew many different Royal Flying Corps aircraft types over the Western Front from June 1915 until March 1918, when he was badly wounded in air combat flying a Bristol Fighter. He was commanding officer of No 22 Squadron RFC between January 1917 and March 1918. He continued to serve through the transition of the RFC into the RAF in April 1918, and was demobilised in 1919, returning to his previous career as a businessman.

PS: Just to clarify – for those whose comments suggest they presume I have been desk-bound since arriving at Flight in 1979 – I do get some proper flying in from time to time.

I have to do that, just to stay up to date with cockpit technology.

Although my medical category still does not allow me to fly solo or in command, I fly all sorts of aircraft, but by law there has to be a captain in the other seat.  Even more regularly I “fly” simulators. The latest sim slot was in a 737 Max at Boeing, December 2019, getting to know the MCAS etc. 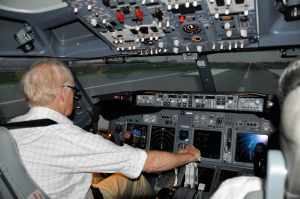 Simulators I have spent recent time in include all the current production types from Boeing and Airbus, including the A380. And a few years ago, Concorde! 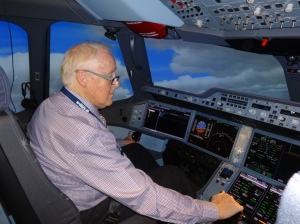 Airbus A350 FFS at Airbus, Toulouse

I don’t consider myself current in anything, but at least I can talk with – and understand – active line pilots and manufacturers’ test pilots when they tell me about their jobs, the aeroplanes, cockpit equipment, and developing techniques or SOPs.

I spend time with the manufacturers’ test and training pilots while they are developing training programmes for new types or marques that have not even entered service yet.

With airlines that are permitted by law to do this, I am sometimes made supernumerary crew so I can jump-seat on line flights to observe changing SOPs, developments in the best use of automation, and new technology-enabled procedures like GNSS-based approaches.

That’s what my job is: learning from people who do it for a living now so I can write about it.