If you look at the statistics for fatal airline accidents in 2017, the year looked faultless.

There were no fatal accidents – at least not among the mainline carriers operating passenger jets.

But if you look at the number of near-disasters, and especially if you hear the accounts of what happened on board and imagine the trauma the survivors underwent, you might wonder what made the difference between the mishaps they survived and fatal crashes in recent years that had almost identical precursors.

The answer is luck. Not a scientific answer, but it is the only word in the English language that describes that difference. A study Flight International/FlightGlobal will shortly publish (Flight International issue 23-29 January) contains an analysis of how luck works in today’s air travel.

Giving detail of numerous recent near-disastrous mishaps, the report observes:  “Sometimes these mishaps start with a technical problem, but more often they are the result of inadequate crew knowledge, poor procedural discipline or simple human carelessness.”

Many of them ended up as that most common of all airline accidents, runway excursions or overruns on landing, and the result is usually serious and very expensive damage. 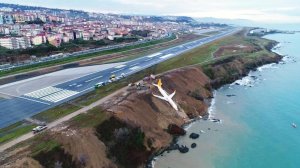 The spectrum of industry discussion about how to deal with this “luck” factor includes – at one end of the scale – automating pilots and their fallibilities out of the picture, and at the other end imbuing today’s crews with a quality referred to as “resilience”. The latter is the ability to face a surprising or unforeseen combination of circumstances with cool logic based on knowledge, situational awareness and skill. That’s what most passengers assume all pilots have.

Airline pilots today are firmly discouraged by their employers from disconnecting the autopilot and autothrottle during revenue flights. There are good reasons for this, the most obvious being that the automation – properly programmed – flies the aircraft more accurately than most pilots can. The argument against it is that if the automation is wrongly programmed, or used  unintentionally in the wrong mode, or suffers a rare failure, the pilot reaction to the unintended consequences frequently demonstrates a lack of “resilience”, setting off a chain of events that can lead to an accident.

The question is, if pilots were permitted to fly their aircraft manually more often during revenue passenger flights, would their manual flying and associated cognitive skills be better primed for the unexpected, making a resilient response more likely when things don’t go according to plan? Pilot organisations like IFALPA believe they would.

To many airlines, that idea is heresy. Letting pilots “practice” flying with passengers on board is just not acceptable, they argue. “Practicing” (what pilots call flying) should only take place in a simulator or an empty aeroplane, they maintain.

The main problem with simulators is that, although getting better all the time, they will – psychologically – be no preparation for the real environment. The sense of risk, or fear, and the stress generated by it, can never be replicated in a simulator.

The reason aeroplanes have not been even more automated than they have been so far is that most flights don’t happen exactly as planned, so the pilots have frequently to intervene to make decisions and adjust the trajectory, even if they use the automation to do it.

This is a discussion that will – and should – continue, and the existing polarisation of views also seems likely to persist.

What is really needed is a cost-benefit and risk examination of whether the regular employment of manual and traditional pilot cognitive skills in flight has net advantages or disadvantages for airlines, but such research has never been carried out.

The ideal institution to do it would be the Institut Supérieur de l’Aéronautique et de l’Espace in Toulouse , which has expertise in measuring neuro-ergonomics in working pilots. ISAE has successfully carried out studies of the effect of stress on pilot cognitive and manual skills, and tested ways of re-orienting pilots when they lose situational awareness.

Airbus is not, at present, able to give specific advice to A320 operators based on information available from the Egyptair MS804 investigation, according to a report by Flightglobal senior journalist David Kaminski-Morrow.

Data transmitted by the aircraft’s ACARS messaging unit to the Egyptair operations centre is insufficient to point to a cause, he reports, explaining: “Airbus has already informed operators, via two accident information bulletins, that the available data is limited and that the analysis of the transmissions does not contain enough data to determine the accident sequence, Flightglobal has established.”

The Flightglobal report continues: “With the inquiry unable to conclude whether a technical flaw contributed to the crash, the airframer has been unable to provide any immediate advisory to operators.

“Although seven ACARS maintenance messages transmitted in the space of 3min – between 02:26 and 02:29 Egyptian time – hint at the possibility of smoke and heat in the forward fuselage, there is no confirmation that the time-stamp of the messages correlates with the order of the trigger event and no clear indication of the precise time interval between them.”

Floating wreckage and body parts recovered from the water where the aircraft crashed into the Mediterranean Sea north of Alexandria, Egypt, so far provide no clue as to whether sabotage or another cause brought the aircraft down. And the search coordinators have released no information about how widely the wreckage field is spread. This can be an indicator of whether the aircraft came down in one piece or had broken up in the sky, but after time the clues can be lost because the floating wreckage can be spread by sea currents and wind.

All this makes the recovery of the main wreckage and the flight data and cockpit voice recorders from the sea bed vital for the understanding of what caused the loss.

Followers of the Flightglobal blog “Learmount”  – which will soon slide gently into the great digital graveyard – welcome to my new site.

This one will offer much the same as my Flighglobal blog did. It’ll certainly serve the same audience – namely aviation’s front-liners – discussing news that affects their lives and profession.

I am maintaining my links with Flightglobal and Flight International as their Consulting Editor, but after many happy years there I’ve now got my P45 and my independence.

I hope you’ll find this space useful, and enjoy it as well.